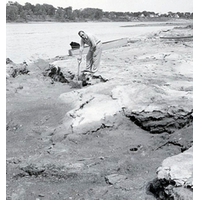 In the 1800s, Alexander Mackenzie called the Rainy River one of the finest rivers in the North West. As newspapers became more popular leading up to the First World War, the river was seen as a perfect location for a paper mill and two were built on either side of the river in Fort Frances, ON and International Falls, MN. The ensuing discharge of pollutants from the paper making process from the 1920s to the 1960-70s had a drastic impact on the river’s health – large quantities of wood chips, fine particulate matter and organic compounds led to what’s seen (and what’s not seen) in these photos – shocking amounts of wood fibre mats downstream of the mills in 1952.

Sewage and other domestic wastes added to the mix. By the late 1950s, pollution of the Rainy River was dire enough for both Canada and the United States to bring in the International Joint Commission to study the problem and, ultimately in 1966, to establish an international pollution board for Rainy River to pressure the governments to make much needed changes. From this point in time, steep declines in pollutants occurred, total phosphorus being one of them.

So, what does this significant cleanup mean for Lake of the Woods, especially because we know that total phosphorus and algae are linked? That’s the topic for next week… be sure to check in!