Watershed News: How does the water flow? 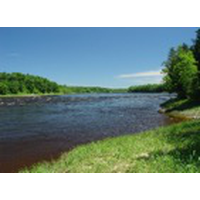 By: Kelli Saunders, M.Sc., International Watershed Coordinator with the Lake of the Woods Water Sustainability Foundation

Have you ever wondered where all the water in Lake of the Woods comes from, where it goes and why it flows in a northerly direction?  The answer is in the history books – it all began when the glaciers that once covered this area started to recede and left us with the watershed landscape we have today.

Between 7,500 and 12,500 years ago, this area was completely under water.  Lake Agassiz, the product of a melting continental ice-sheet, covered what is now western Minnesota, eastern North Dakota, southern Manitoba and northwestern Ontario.  As the glacier retreated, so did Lake Agassiz, leaving lakes and rivers in the low-lying areas.  As the immense weight of the glacier on the land lessened as it retreated, the earth’s surface began to rise (isostatic rebound), first in the south and much later in the north– what resulted was a tilt in the land that would see the northwestern portion of the basin lower than the southeastern.  This is why the flow of water is towards the northwest.

The surface area of Lake of the Woods is 3,850 sq.km – where does all this water come from?  By far, most of the water (about 75%) entering the lake is from the Rainy River at Fourmile Bay at the south end.  In fact, the Rainy River drains a massive land area of more than 50,000 sq. km (Clark and Sellers, 2014) in both Ontario and Minnesota, with its headwaters just west of Lake Superior. To put this into perspective, the total land area of Nova Scotia is 55,000 sq km, including Cape Breton and many other coastal islands, so the size of the watershed draining via the Rainy River is immense! Other sources of inflow to Lake of the Woods include the smaller streams and rivers encircling its perimeter, rain falling directly on the lake and, when water levels are lower on Lake of the Woods than Shoal Lake, water can flow in from there as well.

So, once the water is in the lake, where does it go? From Lake of the Woods at Kenora, the water flows north and then west down the Winnipeg River to Lake Winnipeg in Manitoba and ultimately down the Nelson River to Hudson Bay.  There are two main outlet channels, known as the Eastern Outlet and the Western Outlet, in Kenora. There is also a small gated culvert at the west end of Portage Bay which discharges water into Mink Bay and then down the Winnipeg River.  Another “outlet” is the aqueduct in Shoal Lake that provides water to the City of Winnipeg.

Here is an interesting piece I took from the Lake of the Woods Control Board website (www.lwcb.ca): “A drop of rain landing on the extreme upper end of the basin on the Canada-USA border (just west of Lake Superior) will travel about 820 km before it exits the bottom end of the basin at Lake Winnipeg. During its trip, the drop will decline through a vertical distance of about 260 m.”  Now, that would be an interesting trip!