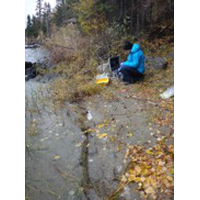 By: Kelli Saunders, M.Sc., is the International Watershed Coordinator with the Lake of the Woods Water Sustainability Foundation.

This week’s article features the fourth and final instalment on the Canadian science program.  In past articles, I’ve talked about algae and how it forms, but this week, I’m reporting on some of the work Environment and Climate Change Canada (ECCC) has been doing to dig a bit deeper into the main drivers of blooms.  Thanks goes out to Arthur Zastepa and Dale Van Stempvoort of ECCC for this update.

Phytoplankton form the base of the food web, converting solar energy into chemical energy (i.e. food) and generating oxygen as part of the process called photosynthesis. Under the right conditions, phytoplankton may grow out of control, causing dramatic changes in water quality and visible surface scums. Referred to generically as “harmful cyanobacterial and algal blooms,” the decaying cell material consumes oxygen in the water and creates the undesirable sights and smells we see along shorelines or in open water.  Some species can produce toxins harmful to humans and wildlife and taste and odour compounds that foul drinking and recreational water.

Scientists at ECCC are conducting field surveys and experiments to understand what drives phytoplankton community structure and function in Lake of the Woods.  While they are measuring water quality in general, they are also collecting information on the type of phytoplankton and other microbes found, their abundance and activity, and what bioactive compounds, including cyanotoxins, are being produced. There seems to be strong regional/local influences on the location and timing of phytoplankton proliferation. For example, Dr. Zastepa’s work is investigating a potential role of sediments in bloom initiation and progression. Preliminary results suggest that sediments can indeed serve as a source of nutrients, biomass, and toxins but the importance of this reservoir depends on regional/local influences such as bathymetry, meteorology, and lake history.

ECCC has also been looking at the role of septic systems in contributing nutrients to the lake. In order to examine this, phosphorus entering the lake from septic systems from cottages and other developments was investigated at Poplar Bay and Sioux Narrows. As a comparison, nearshore groundwater and surface water was also measured from a more urban setting on the western edge of Kenora (Keewatin).  Eleven sampling trips were carried out between the fall of 2016 and the fall of 2019. ECCC took samples of groundwater and surface water at all locations, analyzing them for various indicators of water quality, including phosphorus, as well as substances that act as tracers of wastewater. The artificial sweetener acesulfame (also known as Ace-K) is a good tracer of septic wastewater because it tends to stay dissolved in water, it doesn’t break down easily, and it is present in wastewater at levels that are easily detectable.

The septic system study suggests that the impact of nutrient loading from septic systems to nearshore areas of Lake of the Woods is diminished by a wide variety of underground processes (e.g. processes that can alter or utilize phosphorus in the subsurface). Evidence of strong phosphorus contamination from septic systems in the shallow waters was not found.  Preliminary results suggest that phosphorus in septic wastewater is largely removed (or immobilized) as it seeps below ground and flows toward the lake.

Sampling of shallow groundwater along the shoreline site in Keewatin indicated some high levels of phosphorus.  While wastewater is not an important contributor of phosphorus at this shoreline, there are other possible sources, such as fertilizers and decaying plant matter.

Updated results of this research will be presented at the next International Rainy-Lake of the Woods Watershed Forum in March 2020.

Bacteria: Two cyanobacterial taxa responsible for many of the blooms observed in Lake of the Woods include Dolichospermum (left) and Aphanizomenon (right).

By the water: Sampling shallow groundwater along the shoreline at Poplar Bay. (Credit:  Ross MacKay, ECCC)