Water Levels Rising says Lake of the Woods Control Board 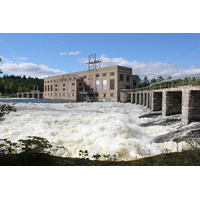 Following a rapid rise in Rainy River flow last week, larger than usual increases in flow out of Lake of the Woods are scheduled beginning September 23.

RISING WATER LEVELS
A special meeting of the Lake of the Woods Control Board was held today (Sept. 23). Jack McKenzie participated in the meeting on behalf of LOWDSA.

The decision was made to rapidly increase outflow this week in response to the exceptionally high fall flows entering Lake of the Woods and the 10-day forecast which indicates more rainfall. The intention is to pass water at a very high rate through October to get the lake down as much as possible before freeze-up, and to also reduce outflow prior to freeze-up.

It will take a couple of days for the full effect to reach Minaki, but by the weekend Minaki levels will be up between three and four feet. The level along the Winnipeg River and the level just north of Kenora will be up even more.

One small piece of good news is that the next few days forecast suggest moderate to nominal rainfall, but some of the longer range forecasts suggest substantial rain next week, this on top of rainfall for the last approximate 30 days that is the second highest in history.

Once the flow is increased, Jack McKenzie does not expect much of a decrease until they get the lake down about a foot - closer to the 1059 foot level.

The following flow changes were agreed to:

The resulting change in the Winnipeg River level once all increases are completed and the changes work downstream are as follows:

Following several weeks of above-normal rainfall across the Lake of the Woods-Rainy River watershed, the dry summer conditions have been replaced by rising flows in most areas with some tributaries seeing rapid increases to high flow. Outflow from Rainy Lake, which the LWCB does not regulate, were increased substantially over the past week, resulting in Rainy River flows that are approaching the record for late September.

The current level of Lake of the Woods is 322.95 m (1059.5 ft), a 65th percentile level for this time of year. Over the past two weeks, outflow from Lake of the Woods has been increased by small amounts each day to reduce risk to wild rice harvest along the Winnipeg River.  Further small increases are scheduled to continue over the weekend for a total outflow increase of 130 m³/s since September 12. With rising inflow to Lake of the Woods, the Board has directed the following larger outflow increases next week to slow the rate of lake level rise.

Further increases each day this week are likely.

With these increases, the Lake of the Woods level is expected to rise by between 8-18 cm (3-7 in) over the next week, with amounts varying based on rainfall received over that period.

Changes to these scheduled increases may be made on Monday as a result of the forecast rainfall and updated forecasts. Additional outflow increases later in the week may be required.

Precipitation has not been as heavy in the English River basin, and the level of Lac Seul and Lake St. Joseph remain seasonally low. Not outflow changes are scheduled for Lac Seul.

NOTE FOR MINAKI Residents and Cottagers:

One the Norman Dam goes above 700 m³/s outflow, the levels at Minaki start to go up. McKenzie is concerned that people who have already closed up for the season may not have put their floating docks up high enough to handle lake level increases that will likely occur by the end of this week.

"How high will it go? That's anyone's guess. People can watch the levels on the Lake of the Woods Water Control Board's  website. They can look at the inflow into the Lake of the Woods vs the outflow and as long as the inflow exceeds the outflow, the lake is going to continue to rise, which means they will have to dump more water down the Winnipeg River. Also, even when the inflow exceeds the outflow, they will probably have to continue with the high outflow in an effort to get the lake level down prior to ice over - ie - mid November."