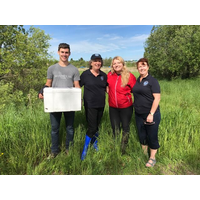 Lake of the Woods District Property Owners (LOWDPOA) staff and members of the 2017 LakeSmart team will be taking further measures to bring invasive purple loosestrife in the Laurenson Creek in Kenora under control this week with a second release of neogalerucella beetles. This second release is made possible with funding received from the Federation of Ontario Cottagers’ Associations (FOCA) and their 2017 Aquatic Invasive Species Program Association Pilot Project.

The beetles are being shipped today, and the timing of their arrival will dictate exactly when the release is carried out.   At this time it is expected that the release will be carried out either late Wednesday afternoon or Thursday morning this week (August 2nd-3rd). Upon their arrival, a release time will be set to follow as quickly as possible with notification of that release time to follow, likely within a matter of a few hours.

This is the second stage in a pilot project for the Kenora and Lake of the Woods Area, with LOWDPOA carrying out a secondary release of neogalerucella beetles. Neogalerucella beetles are a well-established biological control on purple loosestrife and can be introduced without any permitting requirements other than landowner permission. The land, in this case, is the City of Kenora’s and permission has been granted.

The first release was carried out in a well-established area of purple loosestrife in the marsh adjoining Laurenson Creek in Kenora, an estimated area of 2-3 acres in which loosestrife appears to be the dominant species. The second release will be done in one of the larger areas of loosestrife plants on Laurenson Creek, closer to Lake of the Woods. Purple loosestrife is well known as an invasive species, which outcompetes the native marsh species and is highly destructive to marsh ecosystems. LOWDPOA President, Nancy Salmijarvi, commented, “The certainty that the purple loosestrife will spread along the extensive shoreline of Lake of the Woods and inland to marshes around the lake unless action is taken is of great concern. Thanks to the special funding received from FOCA, we are able to move ahead on this initiative sooner than anticipated. “

“Invasive species are one of the top threats to the integrity of aquatic ecosystems, to the quality of the recreational experience on the water, and to the economic success of rural communities”, commented FOCA Executive Director, Terry Rees. Concurring, Diane Schwartz-Williams, LOWDPOA Executive Director added, “These threats are not taken lightly in Kenora and the Lake of the Woods Area where healthy lakes are critical to both our quality of life and our economic success and we encourage everyone spotting a growth of purple loosestrife or any other invasive species to take a picture, note the location and report it at https://www.eddmaps.org/ontario/”.

With this pilot project it will be possible to catch the loosestrife invasion at a relatively early stage and establish a local population of neogalerucella to assist in the long-term control of loosestrife, not just around Laurenson Lake, but also in the larger surrounding area as the beetles are strong fliers and their populations can multiply rapidly.

For more information on this invasive species and the use of neogalerucella beetles on bringing purple loosestrife under control, see the June issue of the Lake of the Woods Area News article.