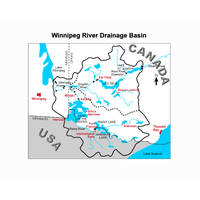 From LOWDSA Lake of the Woods Control Board Representative Jack McKenzie:

I just completed a conference call meeting with the Lake of the Woods Water Control Board and thought you might like to know some of the numbers discussed.

The level of the lake at freeze-up, namely approximately November 15th, stood at 1060.7 feet elevation.

The preferred level for freeze up is 1059.0 feet, or lower, so you can see that the ice formed about a foot and one half above "normal".

Since then, the outflow had been held at about 700 cubic meters per second, which reduces the level at Minaki to about winter normal..

The lake level, today, stands at 1059.2 feet which is down about 18 inches since the ice formed.

There is concern about the spring run off, due to WET conditions last fall, so they have targeted trying to get the lake down to a level of 1057.5 feet come April 1st.

The outflow rate will be cut GRADUALLY from the current 700 cms to about 600 cms over that time.

That's a projected drop of about three feet since the ice formed in mid November.

The other interesting item that was discussed is the ice thickness. Reports are that it is about half of what many consider "normal", due, most agree, is due top the high outflow = current under the ice.

Due to high flows expected throughout the winter, swift currents may make areas along the English and Winnipeg rivers unsafe, including some areas that normally have reliable ice cover. There will also be areas of Lake of the Woods where much higher currents than normal may affect ice stability. The Board urges caution when on or near these waters over the winter.