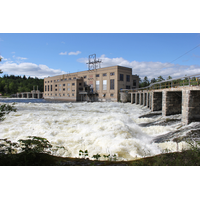 Following a relatively dry summer, rainfall in September across the local Lake of the Woods watershed was the third highest on record, behind 1991 and 1941, more than double the normal rainfall for this period. This has resulted in fast rising lake levels and river flows in much of the watershed over the past two weeks. Inflow to Lake of the Woods sharply rose to over eight times the normal September rate.

In response, the LWCB directed a series of large increases in outflow from Lake of the Woods into the Winnipeg River, rapidly raising the level of the Winnipeg River over the last week. The outflow increases continue to work their way through the Winnipeg River system. The level below Norman Dam should be leveling off this week. The level at Minaki is still expected to rise by a foot or more this week before levelling off, a total rise of roughly 90 cm (3 feet). Under high flows, Whitedog Dam operations cannot further reduce the river level at Minaki.

In Manitoba, the Winnipeg River level at Nutimik Lake is expected to rise by at least 120 cm (4 feet) in response to last week’s flow increases from Lake of the Woods, with additional rise over the next couple of weeks expected due to rising flows in the English River system.

Lake of the Woods outflow is approximately 90% of the maximum possible at the present lake level. The LWCB is balancing the impact of high flows on the river against the risk of a high lake level at freeze-up and high winter outflow, both of which carry risk to shorelines and recreation. Longer term, it is important to lower the lake level before the spring melt to reduce risk of even higher lake levels and river flows. This leaves the next few weeks for high flow to move water downstream.

Outflow from Rainy Lake is roughly triple the rate normally seen at the start of October and is declining. The remaining portion of the inflow to Lake of the Woods is mostly from small tributaries, wetlands, and rainfall directly on the lake over the past week. Should dry weather develop, it is expected that lake inflow will quickly drop, allowing for lake level decline. However, given the saturated conditions, any additional rainfall will contribute to runoff and additional inflow.

Most of the latest forecasts suggest the level of Lake of the Woods should stabilize over the next week, with some additional rise possible with rainfall this weekend. The LWCB is monitoring conditions closely to determine if further outflow increases are warranted. Outflow is expected to remain high throughout October under all precipitation scenarios.

Please visit www.lwcb.ca for the latest water levels and flows see the LWCB’s Notice Board for updates on planned flow adjustments: