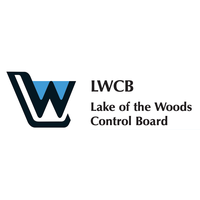 After two weeks of very dry weather, the next few days will be much wetter for most parts of the Winnipeg River basin with a low-pressure system slowly tracking through Northwestern Ontario. Over the next few days, precipitation totals are expected to reach at least 50 mm for the majority of the basin, with some locally higher amounts of rainfall possible. This precipitation will cause tributary flows to increase temporarily and will add inflow to the major lakes.

The current level of Lake of the Woods is 323.20 m (1060.4 ft), 90th percentile level for this time of year. The average lake level declined by 16 cm (5 in) over the past week. The forecasted precipitation will not stop the lake level decline, but will simply slow the rate of decline to 4 to 11 cm (1 to 4 in) over the next week. The scheduled Lake of the Woods outflow decrease to 1000 m3/s has been postponed to Monday, September 19th.

Over the next few days, Winnipeg River levels may remain stable with local inflow increases caused by the precipitation. However, by Monday with the outflow reduction from Lake of the Woods, the levels along the Winnipeg River are expected to decline by 18 cm (7 in) below the Norman Dam, by 14 cm (5 in) above the Dalles and by 11 cm (4 in) at Minaki with this outflow reduction.

The current level of Lac Seul is 356.36 m (1169.1 ft), a 40th percentile level for this time of year. The lake level declined by 4 cm (1 in) over the past week and with the forecasted precipitation is expected to remain stable or increase by up to 5 cm (2 in) over the next week. Lac Seul authorized outflow is 300 m³/s with no changes scheduled.

An additional Public Information Session has been added to the schedule for next week. On Wednesday, September 21st a session will be held in Morson, ON from 1:30 to 3:00 pm at the Morson Community Hall.